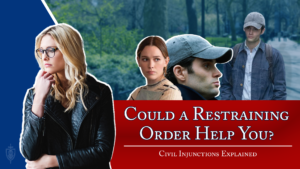 I am trying to get an injunction.

If you are the petitioner in an injunction matter, you are the one asking the court for an order of protection. This order legally protects you from the respondent. If the respondent violates the court’s order, they can go to jail!

The first step in getting an injunction is by going down to your local courthouse and filling out an application for injunction. The courthouse staff should be able to help you do that. There are several different kinds of injunctions available and you will need to learn which one applies to you. To make the process easier, each of the links below has a brief explanation on each kind of injunction.

Once you submit your packet/petition, a judge will review it. One of three things will then happen:

If you are granted a final hearing, that will be the day a judge will need to hear from you personally as the petitioner. If you do not show up, your case will be dismissed. There will be no consequences or ramifications if you do not show up. You will not be in trouble with the court and you can always file a new injunction in the future if you need protection.

You will then have to present the proper evidence to get an injunction. That evidence will depend on what kind of injunction applies to you. Below are the injunction options in Florida.

What kind of injunction should I get?

Each of the 6 below will link to individual pages with specific content on each kind of injunction.

Learn more about our services in Criminal Defense, Personal Injury, and Injunctions.