Can I Own Guns with an Injunction Against Me?

If you have been served an injunction, you may wonder just how this will impact other aspects of your life. Primarily, if you own a gun, you may wonder if it is now illegal to have it in your possession. This article will discuss the litigation that prohibits the possession of a firearm while under an injunction in the state of Florida.

Getting an Injunction in Florida

An injunction is a legal term for a restraining order. It is given to keep one person from contacting another. In Florida, there are five different categories under which an injunction can fall. These are:

Typically, the one seeking an injunction against you (the Petitioner) will need to show the court viable evidence that she needs a protective order for her safety or the safety of her children. If the court decides to rule in her favor, then you (the Respondent) will be served a restraining order 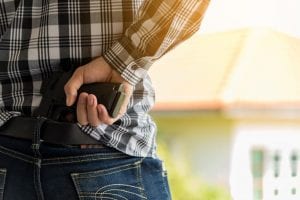 Although the terms of each order differ from each other, the overall goal is to keep you and the Petitioner separated. In some cases,  it may be acceptable that you and the other person meet to hand over children for a court-issued child custody agreement in terms of supervision. Typically, contact is severed. You run the risk of penalties and usually arrest if you attempt to contact the other person.

Keep in mind that it is also possible to face penalties if the other person contacts you, too. So, if to avoid criminal penalties after being served with an injunction, it is best to stay out of contact completely with the Petitioner and avoid legal trouble.

Possession of a Firearm with an Injunction

So, if you possess a firearm while you are served an injunction, it is best to hand over the gun to someone else. Violating the terms of an injunction in any capacity could result in arrest and incarceration.

Protecting Your Firearms from an Injunction

If you are accused of domestic violence and are concerned about preserving your Second Amendment rights, attorney Thomas Feiter can help you take the correct measures to help your case. Mr. Feiter was named the Florida Bar’s Board-Certified Lawyer of the Year in 2015 and has extensive experience as a trial lawyer in Orlando. Call The Fighter Law Firm at 807-344-4837 or fill out our contact form for a free consultation.