What Is An Injunction?

Here are the basics on how injunctions work here in Florida:

Injunctions are designed to provide a rapid means of protection for individuals free of charge within our court system.  The restraining order (or injunction) is a court order that prevents someone from doing something to or coming into contact with another person.

Petitioner = the person seeking protection from the court.

Respondent = the person who allegedly committed (or threatened to commit) violence.

In Florida, there are six different types of injunctions:

More Information on Injunctions and How They Work: 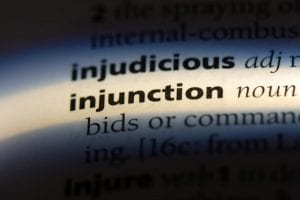 While different things must be shown for each kind of injunction, the standard is the same for all six.  The petitioner (the one asking for the injunction) must demonstrate to the court by competent substantial evidence that the requisite violence occurred.

During the final injunction hearing, the parties are not required to have attorneys – although we highly suggest it.  When the hearing is held, both sides are entitled to an impartial decision-maker and the opportunity to present their case.  Either side can call witnesses and present evidence.  This is where an attorney can significantly help you present to the court your side of the case.  The rules of evidence and court procedure are relaxed somewhat in injunction hearings, but they do still apply.

When the court holds the final injunction hearing, it must make findings of fact that there exists circumstances to warrant the issuance of the injunction.  For example, yelling profanities and threats at the petitioner are not always sufficient – even if they occur on more than one occasion.  A Florida court has even held that a respondent’s statement that he had a gun and that he wasn’t afraid to use was not sufficient to constitute a threat because there was no overt act that indicated an ability to carry out the threat or to justify a belief that any violence was imminent.  Santiago v. Towle, 917 So.2d 909 (Fla. 5th DCA 2005).

Courts may have many injunction hearings set for any given day and your time before the judge may be limited.  Go into the courtroom with the confidence that you have an experienced trial lawyer with the skills and experience to present your case effectively. Don’t risk getting a false injunction!  At Fighter Law, we strive to be the most skilled injunction lawyers in Orlando.  We would be honored to help you in your time of need.

Can a person lie in a petition for an injunction?

There are many different theories as to why people lie and a skilled defense attorney should be able to bring to light any motive or bias a petitioner may have to falsely seek an injunction.

Here are some of the theories clients have presented to me over the years:

Which county court should I file my injunction in?

You can file for an injunction in the county where you live (either temporaily or permanently), where the respondent lives, or where the violence occurred.  There is no minimum residency requirement.

Can text messages be used to get an injunction against me?

Yes, text messages can be used in injunctions.  However, anyone can fake text messages.  Therefore, in order to get them entered into evidence for the court to consider, you have to authenticate them.  In other words, there has to be something that shows that the other person in fact sent you the text messages.  Circumstantial factors can be used to “authenticate” the text came from a particular person.  The case to read on this point is Walker v. Harley-Anderson, 45 Fla. L. Weekly D2116a – a 2020 4th DCA case.  Some of the factors include context like the person’s name being contained in the messages, other witnesses who can testify that they have communicated with that person at that number, addresses, things like that which can be linked back to the person.

Can an injunction be dropped if the petitioner does not show up for the final injunction hearing?

Usually, yes.  Absent exceptional circumstances, the court will usually dismiss or throw out the injunction and the respondent will be free to go.

What happens if the respondent does not show at the final injunction hearing?

Can a party (or parties) seek to amend or later dismiss an injunction that has been entered by a judge?

Yes.  Florida law specifically allows for that.  The party (or parties) must petition the court to modify or dissolve the injunction.  But be warned – the injunction will NOT be considered amended or dismissed until the judge signs an order indicated such.

What can the court do to me if they enter an injunction against me?

The court has the authority to order you not to have any contact with the petitioner, to order you to attend classes (including the batterer’s intervention program), to prohibit you owning or possessing any firearms, to have supervised visitation with any children in common and any other conditions the court deems necessary to protect the petitioner.

What happens if I have not been served with an injunction?

You MUST be served in order for the injunction process to move forward.  Due process requires that a respondent be served with the injunction papers before the final hearing can take place.  If you have not been served, the injunction is technically not enforceable and you cannot violate it.  If a final order has been entered without you being served, that is reversible error.  In other words, it can be undone.

Please click on this image below to learn more about injunction specifically in Orange County, Florida. 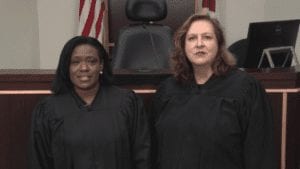