A person experiencing acts of violence at the hands of another individual in Florida may have grounds for a repeat violence injunction. When seeking a repeat violence injunction in Florida, the petitioner, or the person seeking out the petition, must demonstrate to the court that there have been two separate incidents of violence or stalking directed at him or her or a member of his or her immediate family – one of which must have occurred within the past 6 months of the filing of the petition.

The person against whom the petitioner seeks an injunction is called the “respondent.” Both petitioners and respondents have legal rights surrounding orders of protection in Florida. Respondents have the right to obtain legal representation to defend themselves against false accusations of violence. If you seek a repeat violence injunction in Orlando or seek to clear a false accusation, Florida injunction lawyers with The Fighter Law Firm can be of service.

What is an Injunction for Protection Against Repeat Violence in Florida

“Violence” is defined as “any assault, aggravated assault, battery, aggravated battery, sexual assault, sexual battery, stalking, aggravated stalking, kidnapping, or false imprisonment, or any criminal offense resulting in physical injury or death, by a person against any other person.” § 784.046(1)(a), Fla. Stat. (2018). 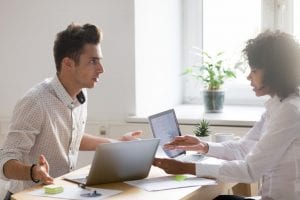 Shouting and obscene hand gestures, without an overt act that places the petitioner in fear, is not considered the type of violence required to get an injunction. Even a representation that the respondent owns a gun and is not afraid of using it is insufficient to support an injunction without an overt act indicating an ability to carry out the threat or justifying a belief that violence is imminent. Additionally, sending unwanted flowers or non-threatening letters or cards are not sufficient to constitute stalking.

Who Can Petition for Injunction for Protection Against Repeat Violence?

An alleged victim of repeat violence must prove that an assault or battery took place to be eligible for this type of injunction in Orlando. Simply knowing that the respondent is a violent individual is not evidence. The alleged victim must have a well-founded fear of imminent violence to prove assault. Those who do not take threats seriously or can only show that the respondent shouted or used obscene hand gestures will not obtain an injunction.

Making a Case for a Repeat Violence Injunction

Multiple acts arising from a single incident are not considered repeat violence where the acts are not separated by time or distance; however, as little as five minutes between two incidents has been found to be enough to get an injunction for repeat violence. Levy v. Jacobs, 69 So.3d 403 (Fla. 4th DCA 2011).

What Can Happen To Me If I Violate a Florida Repeat Violence Injunction?

In addition to the above, any person who suffers an injury and/or loss as a result of a violation of an injunction for protection against repeat violence, may be awarded monetarily.

Why You Need an Attorney in a Repeat Violence Case

You must take several measures to obtain or fight a repeat violence injunction in Orlando. Many victims believe they can show up in court and tell their side of the story; however, it is unlikely that you will be able to make a strong case for an injunction without the aid of an experienced lawyer.

Attorneys with The Fighter Law Firm have years of experience helping people throughout Orlando and the Greater Central Florida area to resolve matters pertaining to repeat violence injunctions.Attorney Thomas Feiter has been named the Florida Bar’s Board Certified Lawyer of the Year in 2015 and is one of few attorneys in the area who is Board Certified in Criminal Trial Law by the Florida Bar and an AV Rated Preeminent Lawyer. Speak to him about your case with a free consultation when you call (407) FIGHTER (344-4837) or complete our contact form.