If you believe that you are the victim of dating violence in Florida, you have the right to seek protection from the courts. An injunction is a court order signed by a judge that is served and enforced by law enforcement. You must present your argument to the court; this isn’t as easy as it may seem. It’s important to work with a knowledgeable dating violence injunctions lawyer to present persuading evidence and make a strong case. 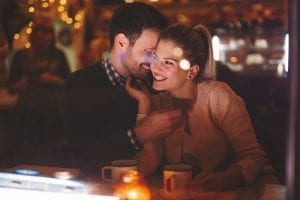 As the petitioner in a dating violence case, you must show the court that:

When considering your case, the court will look for three factors to determine whether a dating relationship exists:

Your attorney will gather the needed evidence to show that there was a relationship of a romantic or intimate nature between you and the respondent to ensure the best possible chance of receiving the injunction. Attorneys with The Fighter Law Firm are strong advocates for victims empower victims to exercise their rights. An injunction lawyer like Thomas Feiter will ensure that you take all the right steps toward securing your safety through the courts.

If you are trying to get a dating violence injunction, you can fill out this form and file it with the local clerk of court – or you can call us and we can help fill it out and file it for you to save you a trip to the courthouse and possibly filling out the form incorrectly.  Usually, having an attorney help you with this form will give you a better chance of getting a temporary and final injunction. 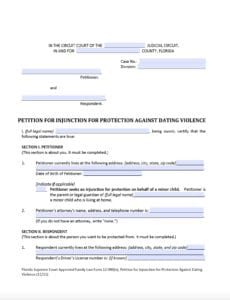 As a respondent to an injunction for protection in Florida, you stand to experience many negative effects. It’s important to know the following about injunctions:

As a respondent, you need an attorney to fight against the injunction against you. Initially, a judge may grant a temporary injunction for protection without a word from you. By the time the injunction hearing takes place to set a permanent injunction, you will need representation to preserve your image and avoid stigma.

What Can Happen To Me If I Violate a Florida Dating Violence Injunction?

You may also be ordered to pay damages to the person who suffers an injury and/or loss as a result of the violation of the dating violence injunction. Damages include costs and attorneys’ fees for enforcement of the injunction.

The Fighter Law Firm helps petitioners and respondents seek the best outcome possible in their dating violence cases. You have the right to legal representation whether you are a victim of dating violence or being accused of it. Exercise your rights by working with our firm.Attorney Thomas Feiter has been named the Florida Bar’s Board Certified Lawyer of the Year in 2015 and is one of few attorneys in the area who is Board Certified in Criminal Trial Law by the Florida Bar and an AV Rated Preeminent Lawyer. Speak to him about your case with a free consultation when you call (407) FIGHTER (344-4837) or complete our contact form.