How an Injunction Can Help Enforce a Non-Compete Agreement

Businesses sometimes ask newly-hired workers to sign a non-compete agreement, or a contract that prohibits them from engaging with or providing services to another business that’s considered a direct competitor. While an employer can’t require an employee to sign a non-compete, they could choose not to hire that individual if they refused.

Companies view non-compete agreements as protection against an employee later quitting and unfairly taking their confidential information to a competitor. Businesses take these contracts very seriously, and will even take legal steps to enforce them. That can include contracts that apply to the activities of former employees. If an employee signed a contract stating that they would not work for a competitor for a period of time after they left the firm, legal action can be taken if the company believes that ex-worker has violated the terms of that non-compete agreement. That can include filing an injunction to enforce a non-compete agreement. 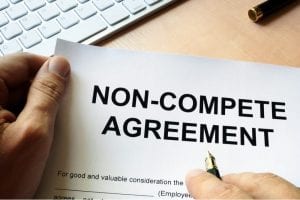 Can you legally enforce a non-compete agreement? If you believe a former employee who signed a non-compete agreement is violating the terms of that contract, you can pursue legal action in civil court. That includes seeking an injunction to prevent the worker from continuing to do any work that violates the agreement. It’s also possible for the company to seek monetary damages for any financial loss due to the actions of the employee who violated the contract.

If your company goes to court due to a violation of a non-compete agreement, you’ll need to show the court:

To demonstrate that a non-compete is a legally valid contract, it’s important to show it isn’t overly broad, which could encourage the court not to enforce it. So how can an injunction assist your case?

How Can an Injunction Help to Enforce a Non-Compete Agreement?

It’s common for employers to enforce non-competition agreements through temporary restraining orders and preliminary injunctions to prevent violations of the contract. But it’s also important to note that if the employee can convince the court that the non-compete agreement was entirely or partially unenforceable, the court could grant an injunction to prevent the employer from interfering with the employee’s new work relationship.

There have been instances when courts have held that a contract had ambiguous geographic restrictions and an overly broad prohibition against working in any position for a competitor, and declared the non-compete agreement unenforceable. In those instances, courts have held that the harm caused to the employee by enforcing the restrictions outweighed the harm to the employer.

However, courts will not prevent employers from enforcing valid non-compete agreements, and injunctions can be a useful tool to get a quick hearing on the merits of the case. A preliminary injunction is essentially an order by a court that forbids one or more parties from doing something until the case has been reviewed. But there are limits to how injunctions can be used. The company would need to show that they have a strong likelihood of success on the merits of the case, and that the company would suffer financial harm without the injunction.

That’s why it’s important to secure the services of an experienced attorney if you believe a non-compete agreement has been violated.

When someone needs an injunction or a restraining order, they’re often facing a time of great uncertainty in their lives. That can be true for companies worried about an ex-employee taking confidential information to a competitor, or employees who feel that contract too broadly restricts their ability to find new employment opportunities. Whether you’re the one who needs an injunction, or you’ve had an injunction brought against you – having experienced injunction attorneys on your side can significantly affect the outcome of your case.

At Fighter Law, our experienced team of injunction lawyers are dedicated to fighting for what’s right and just. We work diligently to win the best possible results for your case and offer initial consultations at no cost to you. Call Fighter Law for attorneys who are prepared to fight for your rights and your protection. Call us anytime at 407-449-1574 or fill out our online contact form.