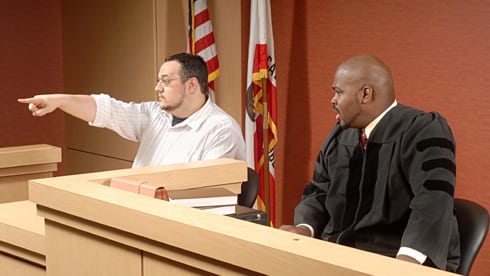 How Eyewitness Testimony Can Be Unreliable

Most people are unaware of the hidden dangers of eyewitness identification.  Crimes usually occur suddenly and take people by surprise, frequently resulting in witnesses or victims making false (or wrong) identifications.

A man was freed this week after spending nearly 25 years in prison for a crime he did not commit.  In 1989, Jonathan Fleming was vacationing in Orlando, visiting Disney World, when prosecutors said that he was actually in New York and committed a murder.  The key evidence in the case came in the form of an eyewitness who placed Fleming at the scene.  In testifying for the prosecution, she said she saw Fleming shoot the victim.

When the prosecutor’s case file was looked at more carefully last year, investigators found that there were other witnesses who were not questioned.  Their statements implicated a different man.  The woman who the prosecutors decided to use as an eyewitness at trial later said she had lied so that police would give her a break on something she had been arrested for.

Fleming had receipts and eyewitnesses who all said that he was in Florida at the time – but none of it stood up against what the prosecution put on at trial.  Fleming was wrongfully convicted and sentenced.  It took 25 years to clean up this mess.

The Fighter Law Firm has significant experience defending these types of charges at both the State and Federal levels.  An eyewitness identification should almost never be accepted as accurate.  Methodology and technique of the identification must be closely scrutinized.  In other words, how and why the police got the witness to identify the suspect (or defendant) must be aggressively investigated and questioned to ensure accuracy.  Was the double blind administration technique implemented?  It is shocking to learn how often it is not.

Many times, either the method the police chose (photo lineup or on the scene identification) or the way they implemented that method (coercion or suggestion) can be found and a motion to suppress the identity can be filed.  In many cases, if the identity is thrown out of court, the entire case gets dismissed.  But this has to be handled at the trial level – before a jury verdict is rendered in the case.

Appeals are almost always very expensive to handle.  It is better to hire an experienced defense attorney for the trial as opposed to hiring one for the appeal.  Exonerations on appeal are rare – perhaps because they cost so much money and involve so much work for the attorneys.  The Innocence Project is an organization that is dedicated to freeing the wrongfully convicted.  Their website (http://www.innocenceproject.org) provides useful information on options that may be available in you or your loved one’s case.  Wherever you are in the process, we can help.  Call us today to learn how.

← Previous Article Why DUI stops no longer require police to see you driving recklessly
Next Article → Preservation of Evidence: Your Due Process Rights and the Obligations of the State