Have you been trespassed or banned from Disney or any other theme park?

If you have been trespassed from Disney, Universal Studios, SeaWorld, Legoland or any other theme park, you might have already learned that it is difficult to get information on how to get your trespass or ban lifted.  Don’t worry, it’s not impossible.  We have successfully helped many tourists or theme park enthusiasts get their trespasses lifted.  We can help you, too. 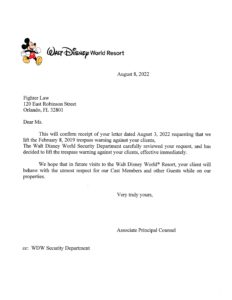 What is a Trespass?

Under Florida Statue §810.09 a trespass occurs when, whoever, without being authorized, licensed, or invited, willfully enters or remains in any structure or conveyance, or, having been authorized, licensed, or invited, is warned by the owner or lessee of the premises, or by a person authorized by the owner or lessee, to depart and refuses to do so, commits the offense of trespass in a structure or conveyance.

For purposes of Disney, this would mean you are no longer allowed on any Disney Property, this includes the Theme Parks, Disney Springs, Disney Resort Hotels, and other Disney owned and operated areas. This could include a “ban” or trespass from Disney Parks and Resorts in other states or countries.

What can get you Trespassed from a Theme Park Property?

Getting trespassed from a theme park, like Disney or Universal Studios, can happen for many reasons.  Some of those reasons include, theft, bringing unauthorized or “contraband” items onto the property or attempting to bring them into the parks, line jumping, going into cast member only areas, violating safety rules or procedures, underage consumption of alcohol, fighting, etc.

Does getting Trespassed mean you have criminal charges?

No not always, just because you have been trespassed does not mean they have brought criminal charges against you. However, depending on the incident that got you trespassed there may be criminal charges associated. Also, should you attempt to go back onto a theme park property, like Disney or Universal Studios, once you have been trespassed, you can be charged criminally for trespassing.

Is the Trespass from a Theme Park Permanent?

The amount of time of a trespass from a theme park, like Disney or Universal Studios, can vary. However, most trespasses that are entered are lifetime bans or lifetime trespasses.

How does Disney deal with Trespasses or Bans?

Disney has its very own security department and while they do not have their own website for security and trespass related issues you can find some information about them here: https://disneyworld.disney.go.com/guest-services/park-security/

Once a person has been trespassed Disney security and the legal team are made aware and all further inquiries into the matter goes through those offices.

What is the process to getting a Disney Trespass lifted?

To get a trespass lifted from Disney one must appeal in writing the trespass. This has several things that it must include in order to give the Security Department as well as the Legal Team the full picture of the incident and anything that has changed or been done since that incident that they may want to weigh in making their decision. While this does not require a lawyer it is encouraged so that a legally sound letter can be send on your behalf and so that nay correspondence with Disney’s legal team can be managed through your attorney.

What if I am denied?

If your appeal to have the trespass or ban lifted is denied, then you can reapply in 1 year.

Here at Fighter Law we have had success on getting these Trespasses lifted for our clients so that they may return to the magic at Disney.

Learn more about our services in Criminal Defense, Personal Injury, and Injunctions.