Contempt is any conduct that defies, insults or disrespects the authority of a court or judge.  In Florida, contempt is utilized and prosecuted by judges to enforce order of the court.  Judges use contempt as a tool to either (1) compel or force a party to behave (civil contempt); or (2) punish a party for behaving badly (criminal contempt).

What is contempt of court?

Technically, there are three elements the court must have in order to find you in contempt:

(1) A lawful court order (or obligation to behave);

(2) Your ability to comply with the order (or behave); and

(3) Your willful refusal to comply (or behave).

What is the difference between direct and indirect contempt?

What is the difference between civil and criminal contempt?

Normally, the main difference between anything civil and anything criminal will be the possibility of going to jail.  Normally, you can only go to jail in criminal cases.  However, that is not the case with contempt!

A person can go to jail for either civil or criminal contempt.  The difference with contempt is that if you go to jail for civil contempt, you can get out of jail by correcting your conduct.  This is usually done by paying a “purge” or bond amount.  For example, if you are found to be in civil indirect contempt of court for failing to pay child support or alimony, the judge may set a bond or purge (in the amount you owe) and send you off to jail.  You can simply get out of jail by paying that purge amount or bond.  This is not the case with any criminal contempt charge.  With criminal contempt, the judge may set a bond for you, but that does not guarantee you will not have to spend time in jail.  So the main difference is that criminal contempt jail is meant to punish you whereas civil contempt is meant to try to get you to still do something.

When can I be charged with criminal contempt, as opposed to just civil contempt?

Short answer, whenever a judge feels like it.  If the bad conduct offends the judge so much, he or she may feel that it warrants punishment (or criminal contempt).  In other words, the judge can make it criminal if they are through trying to get you to “behave” and they just want to punish you.  Failure to appear as summoned by a subpoena or order of the court can result in criminal contempt.  However, it is very rare.

Bottom line – don’t piss off the judge or be disrespectful.

What can I expect at a contempt hearing?

If the judge heard or saw the contempt (or bad behavior), they can summarily punish the person (the “contemnor”) without hearing testimony or issuing an order to show cause.  The judge can simply adjudicate you to be guilty and sentence you to jail or fine you or both.  However, the judge MUST allow you the opportunity to present “excusing or mitigating circumstances.”  The judge should give you an opportunity to consult with an attorney as well, although that is not set out in the rule.  The judge should be patient and courteous with you.  Once you have been given a sufficient opportunity to defend yourself, the judge will decide if you are guilty or not guilty.  If you are convicted, the judge must (in order for it to hold up on appeal) set forth a recital of the facts on which the conviction is based.  If they do not do that, the appellate court should overturn your conviction.

With indirect criminal contempt, the judge is first required to issue an order to show cause that spells out the details of how you allegedly violated a court order.  It is really important that you read Rule 3.840 because if the court does not follow this point (or anything else spelled out in the rule), you can file a motion to dismiss.

Issuing an order to show cause can be prompted by (1) the judge finding out on their own that you violated an order; or (2) someone filing a notice of civil contempt notifying the judge. It is usually the latter.

Once you are served with the order to show cause, you can file a motion to dismiss, a motion for statement of particulars, or answer by way of providing a defense or explanation.  The judge also has an option to issue an order of arrest – although this is very rare.  If that is the case, you should be given a bond, which will allow you to be released from jail once arrested.

Just like in a direct criminal contempt hearing, the judge can adjudicate you to be guilty and sentence you to jail or fine you or both.  However, here the judge must hear testimony (because the judge did not actually witness the bad behavior).  During the hearing, the judge MUST allow you the opportunity to present “excusing or mitigating circumstances.”  The judge should give you an opportunity to consult with an attorney as well, although that is not set out in the rule.  The judge should be patient and courteous with you.  The rule here allows the judge to be assisted by a prosecutor as well – however, most judges do the “prosecuting” themselves.

If you are convicted, a special rule: Before the sentence is announced, the judge must inform you of the accusation and judgment and inquire as to whether you have any cause to show why sentence should not be imposed.  You must be afforded the opportunity to present evidence of mitigating circumstances.  The sentence must be pronounced in open court and in your presence.  Remember, if the court fails to strictly adhere to this rule, the conviction is subject to reversal by an appellate court.

Civil contempt procedures are far less formal than criminal.  However, you are still entitled to a fair hearing and constitutional due process.  Basically this includes a right to be noticed and an opportunity to be heard.  It is still advisable to hire an attorney to help with a civil contempt hearing.

Do contempt convictions show up on criminal background checks?

Some of the possible penalties that a judge can impose if you are found in contempt of court include the following:

A collateral consequence of being found in contempt is that future judges may see it on your record, which can affect your credibility with the court.

Can a judge hold me in contempt for failing to comply with the terms of an injunction?

Absolutely.  Usually, we see this when the petitioner files a motion for civil contempt with the court.  This motion alerts the judge to your failure to comply with an injunction order and the judge will have to decide if they are going to issue an order to show cause or not against you.

In Central Florida, it is more often the case that the court will bring the matter to the attention of the local State Attorney’s Office, who may decide to initiation criminal proceedings against you.  Florida Statute 741.31 is the law on point.  The crime of violating an injunction is a first degree misdemeanor, which means that it is punishable by up to one year in jail.  Violations of injunctions are also enhanceable.  A third or subsequent violation can be filed as a third degree felony. 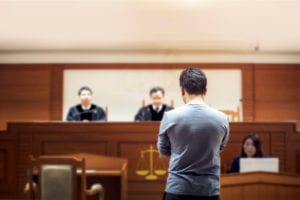